A draft law has recently been introduced by the Andhra Pradesh government in the state assembly for setting up a maritime board. State cabinets of Kerala, Karnataka, and Orissa are expected to introduce similar bills in their assemblies as they have also cleared the formation of maritime boards. States of Gujarat, Maharashtra, and Tamil Nadu have maritime boards already.

A separate maritime board for the states is expected to enable faster decision making and would also be better equipped to implement developmental projects and all other issues related to ports in the country. Port activities will be more streamlined if the states have their own maritime boards. Ports/sea routes account for 90% of India's external trade by volume and 70% by value. 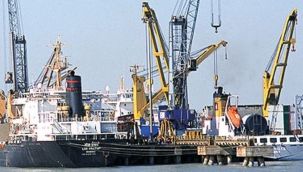 Union shipping minister, G.K. Vasan has also said that handling capacity at Indian ports will have to be tripled to 3.23 billion tonnes (bt) by 2020 from 963 million tonnes (mt) currently in order to be able to avoid delays and congestions and cater to the growth in port traffic. A significant portion of the additional capacity is expected to come up at ports outside the control of the Union government. Such ports would likely grow at 16% a year to handle 1.27 bt of cargo a year by 2020 from the existing level of 289 mt, said Vasan. Ports controlled by the Union government are expected to grow at half the rate - 8% a year - to reach 1.215 bt a year from 561 mt currently.

Coastal states in India have been constantly guided and advised by the Union government to set up maritime boards in order to become eligible for Central financial aid for developing port infrastructure. According to Union shipping secretary K. Mohandas, "Ports located in coastal states have a big role to play in the capacity augmentation exercise...The state governments will have to create an investment friendly environment for public-private partnership projects in port development."

The Union government had recently informed the coastal states of its willingness to fund as much as 50% of the cost of road connectivity to new port projects in these states; 30% of the cost will have to be borne by state governments, while private developers will have to contribute the remaining 20%.