As per a research put forth by HSBC, it is clear that the dominance of the US dollar as the standardized currency is coming to and end, paving a way for Asian and African countries to set new standards.

A new Silk route is in formation, as a trade link will be created among Asian countries of China and India, with Middle East nations, Africa and Latin America, as the US has begun losing prominence as a global superpower and primary consumer for world trade.

Emerging nations will increasingly trade among themselves, as their domestic consumers grow. A practical model of trade among emerging and emerged nations has been followed till date, whereby the growth of emerging nations depends upon exports to the developed nations. However, the development process by the emerged economies is not rapid enough to sustain this model for long.

The US is China's largest trading partner today, but in 20 years, India, Brazil or Russia are likely to be the main destinations for Chinese goods. India and Brazil already export more to the emerging world than to the developed world. Together called BRICS, these nations are soon to overtake the monopoly trade by the USA. The densely populated economies are proving to be tremendous sources of not just labour, but also foreign capital, raw material, and also business destinations for the American economy.

Let us take an instance of cars. The demand for cars is different, between an American and an Asian. The average American is taller, fatter and prioritizes on health and safety requirements, which means bigger, heavier cars. On the other hand, a car that appeals to a first-generation buyer in India or China needs to be within his budget, not heavy, reliable and with a good mileage, rather than massively safe,or what would appeal to an American. In fact, Indian exports are already making their way to ASEAN, Africa and other emerging markets.

Consequential to this collapse of the American economy as a monopoly ruler, it is most certain that the US dollar will lose prominence, paving way for domestic currencies to set standards, most likely Rupee or Renminbi. New economic and commercial zones, such as Singapore and Hong Kong are gaining momentum - gradually shifting the control of capital flow from developed nations.

According to the HSBC report, of the top 10 container seaports in the world in 2009, one is in Europe, one in Dubai and eight are in Asia - of which five are in mainland China. Twenty years ago, not a single Chinese port figured in the top ten. HSBC, which also did a study estimating that China will be the top and India the 3rd largest economy in 2050, has based its revolutionary predictions on the fact that shipping , rail, air and electronic connections are increasing among emerging nations. The activities of aids to trade are gaining rapid momentum in Asian countries, and that too, at a largely visible rate.

Besides heavy investments in the infrastructure sector in the form of railway construction in Colombia, ports constructions in Myanmar etc., China has inched further to protect its supplies of raw material and energy from Africa, Middle East and Latin America.

History is evident of this economic growth phase. South Asia is undergoing similar political and economic phases as Europe and America did at the end of the Wars. However, in the 50s and 60s, emergence of trade barriers changed the economic status of these regions , and in the 80s and 90s, opening up of capital market flows led to a new benchmark in the rise of these economies. 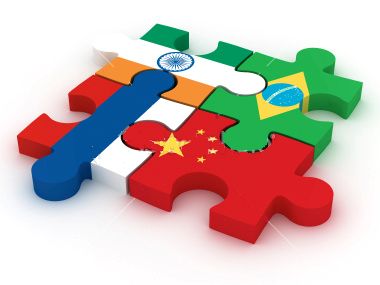 In fact, history can be repeated for China, which had been the founder of the original Silk route under the Han dynasty in 200 BC. Recent trends and statistics are constantly indicating towards a revolutionized global economy, with its reigns in the hands of the BRIC nations and India speeding up to a position of Number 3 by 2050. In the meanwhile, there will be a complementary drop in the shares of the western markets.

External Links:
BRIC: In economics, BRIC is a grouping acronym that refers to the countries of Brazil, Russia, India and China, which are all deemed to be at a similar stage of newly advanced economic development. It is typically rendered as "the BRICs" or "the BRIC countries" or alternatively as the "Big Four".

See also a paper on China: The Emerging Superpower, by Major H.A. Hynes