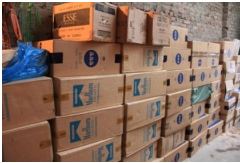 Around 11.3 million counterfeit cigarettes were seized midway by the custom duty officials, with a £3 million smuggling operation by a Chinese gang going bust. Supposedly, this was the biggest smuggling captures in the North East.

Most of these counterfeit cigarettes were of the Super-king and Regal brands, two of the most popular brands in the whole of United Kingdom. A special taskforce found the counterfeit cigarettes in a filthy warehouse on the riverbanks of Tyne in Gateshead, Newcastle. The main thing that gave it away was the similar serial number on all the cigarette packaging boxes.

As is expected, the quality seems to be ‘extremely poor’ and supposedly, this could have given rise to serious health problems. In fact, deaths caused by lung cancer in that area is almost one and a half times higher than that in the rest parts of the country, and cigarette smuggling is one of the serious concerns of the area, according to Michael Connolly, North East chief customs detection officer.  He also believes that it is primarily run by global forces.

Not only had it posed serious health problems if succeeded, around £2.2million in excise duty would have been cheated from the taxman, which is indeed a huge sum to reckon.

But this is definitely not the first smuggling case gone bust in UK. Last year in July, a gang was captured for smuggling around 10 tonnes of filthy form of cannabis worth about £60 million in flower-carrying trucks. Following that in January this year, a ex-US marine was accused of smuggling around 80 guns into UK from US. Around 60 guns remained unaccounted for.

There is no stopping the smuggling activity in UK as it seems. This recent smoke counterfeit example just brings home the point. Strict precautionary measures should immediately be adopted by the UK government, if at all.

Read more about Customs valuation of goods (as per WTO norms) here.

Get a general idea about Customs here.